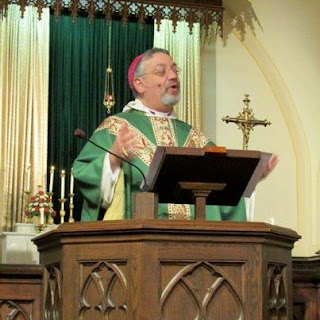 When I was in Washington, DC last year, walking down the street with a priest, both of us dressed as we do on a “work” day, we were stopped by a woman who asked for a blessing. I deferred to my companion, but she protested, pointing to my purple shirt: “I ain’t never had a blessing from anybody in that color shirt before!” So I gave her a blessing, though I don’t fool myself that she could articulate any sort of coherent theological understanding of what a blessing is. I’m sure many people are quite superstitious, or even frivolous, about the whole thing. But I always give one when asked, because there’s something inside me that tells me, on those occasions, that that’s precisely what I was ordained to do.

We know that God is indeed in the blessing business. We know from the witness of scripture that God blesses individuals and families and organizations and institutions and causes and movements. And we know that God has blessed us in the past. Everyone here today has been blessed with the gift of life, and virtually everyone with much, much more than that. Trinity has been spectacularly blessed in the past, and this beautiful building we are worshipping in is ample testimony to that blessing. The Episcopal Church and the Anglican Communion have been richly blessed in the past. Episcopalians have always been over-represented in the ranks of our elected and appointed leaders. The Anglican expression of Christianity has helped millions of people grow in their knowledge and love of Christ and come to maturity in holiness and virtue. Yes, God has blessed us in the past, and we can infer from that that he is quite capable of blessing us that much and more in the present and in the future. In other words, God has an excellent “track record,” which encourages us to rely on past performance as an indicator of future results.

Yet, in the midst of this, we remain hungry and thirsty for God’s blessing—so much so that we are willing to stop a stranger on the street on the chance that he might be able to dispense some of this blessing. We feel ourselves to be in a drought, in a famine, of God’s blessing. We feel heavily burdened by the chores of living and dying, of loving and learning, of struggling and finding rest. Even Christians abuse their children, commit adultery, and get divorced; Christian households live on credit and file for bankruptcy, Christians become alcoholics and drug addicts. We wonder: where is this God who blesses?

In many of our parishes—Trinity included, I’m sure—we look wistfully back on the golden age of the ‘40s and ‘50s, when attendance was double and triple what it is now, and Sunday school and youth groups were bursting at the seams, many of our parishes could afford to keep two full-time priests on the paid staff. And not too long ago, it looked like Anglicanism was the stable operating table on which the fragmented body of Christ could be stitched back together. We were both catholic and reformed, and thought we could model to other churches the way to successfully maintain unity in diversity. More recently, we’ve found out that we’re not as good at that as we thought, and we haven’t even been able to maintain visible unity among ourselves, let alone re-unite with others. We worship a God who can bless, has blessed, and, according to his promise, will bless. But we feel a dearth of that blessing in the present.

The residents of the ancient village of Nazareth in Galilee also craved God’s blessing.
And, for a while there, it looked like they were going to get what they craved, in spades. One of their local boys had made good. He was already slightly famous as a healer and a teacher in the towns and villages of the area, and every indication was that his notoriety was only going to increase, both in scope and scale. Any status or prestige that he might acquire, of course, would only reflect favorably on his hometown. He would be known not simply as Jesus, but Jesus of Nazareth. Maybe the town could finally shed its reputation as a backwater breeding ground for yahoos. With any luck, there would be a thriving tourist             industry to jump-start the local economy: “Come see where Jesus lived. Come see where Jesus went to school.”

But it was not to be. Nazareth is, in effect, disowned by its most famous resident.
He was subtle about it—with cryptic remarks about impressive miracles that God accomplished in Old Testament times outside the boundaries and power structures of his own chosen nation of Israel—Jesus was subtle about his rejection of Nazareth, but his point was not lost on the Nazarenes. In fact, they’re so disturbed that they gang up on him and try—unsuccessfully, of course—to kill him. And Jesus simply went … elsewhere.

In Jesus’s case, “elsewhere” meant the nearby village of Capernaum (and I’ve been to both places, and I can see why Jesus picked Capernaum). But as a metaphor, as the “other” place where God’s blessing happens, while it’s not happening where we are, “elsewhere” has a rich and continuing meaning and significance. In the century before last, the Episcopal Church grew along with the American frontier. It is significant, I think, that the impetus to legally incorporate the church in this country came from a perceived need to improve our missionary         outreach. Hence, the name chosen for incorporation was the “Domestic and Foreign Missionary Society,” and every member of the Episcopal Church was, and still is, a constituent member of a missionary society! Fifty years ago, a steady 2% of the American population was Episcopalian. Now that figure is way less than 1% and shrinking. In a land where the majority of the founders were Anglican, we are now outnumbered by sub-Christian groups like the Mormons and non-Christian groups like Muslims. Not a good record for a missionary society!

Yet, God still blesses Anglican Christianity—he just does it “elsewhere.” Growth in many of the third world Anglican churches in Africa and Asia is explosive. I spent some time with a Tanzanian bishop last spring. His major anxiety is how to manage the numerical growth in his diocese. He complains, “My people just won’t stop evangelizing, and I can’t train and ordain clergy fast enough to pastor them!” God’s blessing in not absent—it’s just elsewhere!

Now, the great temptation for us “Nazarenes” who hunger and thirst after God’s blessing, and see that blessing being poured out in Capernaum and “elsewhere,”—well the biggest temptation might be to go “elsewhere,” so maybe I’m talking about the second biggest temptation—the second biggest temptation is to imitate “elsewhere.” If the folks on the next fairway are playing with navy blue golf balls and scoring a birdie on every hole, maybe we ought to start using navy blue golf balls. If the church down the street has a rodeo at every service, and the church around the corner has stand-up comedy instead of a traditional sermon, and both churches are packing them in, then maybe we should look for the best deal on cattle and comics.

Tempting, but I don’t think so. To simply imitate some other church’s style in worship or music or theology or piety misses the point. It assumes that these are the things that God is blessing, when, in fact, what God is blessing is not their technique, but their openness to God’s word, their docility and availability to God’s Spirit, their welcoming attitude toward God’s presence and activity in their midst, their willingness to let the Spirit of the Lord lead them, even if it means changing routines and patterns that have become familiar and comfortable. It’s the attitude of those Capernaumites, not their techniques, that we blessing-starved Nazarenes should be imitating.

Put simply: God’s blessing, God’s power, operates where God’s word and Spirit are welcomed. If God blesses us—if God blesses us as individuals with health and prosperity, if God blesses Trinity parish and the Diocese of Springfield with vitality and growth, if God blesses the Episcopal Church with the grace          to recover its soul and sense of godly direction—such blessing will be the result, first, of God’s sovereign choice, and, second, of our willingness to be formed according to his purposes. Just as a plane cannot land where no runway has been prepared, God’s blessing cannot land on an individual or parish or institution whose heart has not been prepared—softened to the loving advances of the Holy Spirit, yielded wholly to God’s will, willing to be challenged and renewed.

Amen.
Posted by Bishop Daniel Martins at 10:00 AM