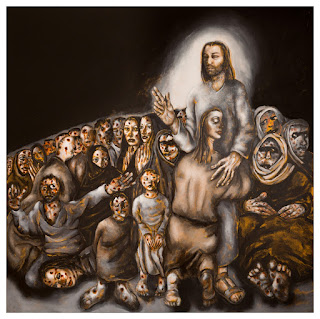 As time goes by, as I get older, I find myself constantly revising my idea of what constitutes "old." Every time I visit a retirement community or a nursing home, I remind myself that the people I meet there, though they look "old" to me—and to themselves when they look in a mirror don't necessarily think of themselves as "old,” but simply as people who happen to be incarnate in old bodies. It probably doesn't seem all that long ago to them that they were middle-aged, or young adults. The fact is, life—even a long life—is short. And along the way, we get sick, and people we love get sick, and we begin to wonder, just how short is "short?" Those of us who believe in God, or who are inclined to believe in God, naturally raise the question, then: why?

If God is the God of life and the living, why do people—young, old, and in between—get sick and die? God has the ability, it appears, to reverse the progress of disease, and even to re-invigorate a dead body with new life. We get glimpses of this possibility and our hopes are raised. God demonstrates that capability liberally and lavishly in the ministry of Jesus. The brand new disciple, Simon Peter, has a sick mother-in-law; she's in bed with a fever. Jesus simply grasps her by the hand, and the fever is gone, and she's on her feet, fixing everybody a meal. That evening, the crowds gathered outside Peter's house, and Jesus cured all kinds of sickness, and cast out quite a few demons while he was at it. That was in the town of Capernaum, and what a sight it must have been!  What a stir it must have caused!

But what about the sick and demon-possessed people in the next town, or in the town beyond that, or in any of the other towns in Galilee? And what about all the sick people in Judaea, and beyond the Jordan in Syria, and to the north in Lebanon, and to the south in Egypt? Inasmuch as he possessed a genuine human body, Jesus could only be present in one place at a time. His ability as a healer was just dandy for those lucky people who were in Capernaum that day, and who managed to find their way to Simon Peter's house. But where was Jesus for all the other sick people in the world that day? How many people in the world died that very day because Jesus was doing his healing in Capernaum rather than in their city or town or village? And, presumably, everyone who was in Capernaum that day, and who got healed, sometime or another got sick again, and died this time. Where was Jesus then? Why don't we hear about the mysterious two-thousand year old citizens of Capernaum today?

Well, you might be tempted to remind me that Jesus still performs miracles, that prayer is still sometimes answered by medically inexplicable disappearances of cancer cells and reappearances of nerve tissue. I know these things happen. I’ve met people whom they've happened to. And I give glory and praise to God whose merciful love manifests itself in healing from sickness. But I also know that funeral establishments across the land keep plenty busy, and that a great many of their customers had prayed earnestly that they would not yet be invited to the position of honor in an escorted parade to the cemetery. Where was Jesus the healer for them?

The morning after Jesus healed the crowds outside Peter's house, he got up very early, before dawn, and walked out into the pasture land beyond the town for some time in prayer. Eventually, his disciples tracked him down, somewhat impatiently. People were looking for him. There were more paralytics who were still lame, blind who couldn't see, and deaf who couldn't hear. His work was not over. But Jesus has other plans. "No, fellas, I'm not going back into Capernaum just now. Let's go to the next town. I've got to proclaim the message there also; that's what I came out here to do."

Mark tells us that he then travelled throughout the region of Galilee, doing two things.  One: "proclaiming the message" —that is, preaching. Two: casting out demons. Healing ordinary physical ailments is not mentioned as part of this essential core of Jesus's activity. No, in Mark's gospel, the entirety of Jesus's life and ministry is interpreted in the light of the cross, and only in the light of the cross. When we ask: "Why does Jesus heal some when they ask for it and leave others sick? Why do some die after much prayer and others recover?” we're not asking the best question. The better question is, "What is Jesus trying to show us when he heals the ones he heals? What is he trying to tell us when some walk back from the jaws of death when it seemed like their number was up?

The answer to our questions is found in the cross, and the healing that flows from the sacrifice that was offered there. You see, the diseases that we're concerned about, the ones we get so worked up over, the ones we pray to be delivered from—from chicken pox to epilepsy, from the common cold to cancer—these are not really the problem. Even if they don't get us, just plain old age will! So when we're miraculously cured of cancer, that's a glorious occasion, but it only delays the inevitable. Our real problem, our real cause for concern, is our relationship with God. The real source of our anxiety is the fact that we're sinners, that by nature we have no portion of the inheritance of Heaven, that we suffer from a condition that no medical doctor in this world can treat, a condition that is fatal to the body, and fatal to the soul. And only in the cross is our hope for deliverance from that dreadful sickness.

In Capernaum, Jesus extended healing to a few people who eventually got sick again, and died. But, on Calvary, Jesus extended healing and life to all who believe in him, healing and life that forgives our sins, heals our guilt, overcomes our shame, and re-directs our lives. In Capernaum, Jesus opened eyes that would see ugliness as well as beauty, and ears that would hear weeping as well as laughter. But on Calvary, Jesus pioneered our passage through all ugliness and weeping and sin and sickness and death, our passage to eternal life and perfect communion with God. The healing miracles that Jesus performed in Capernaum and elsewhere, and the healing miracles he continues to perform in our own time, are good news, but they are not in themselves the good news. They prepare us for the good news, they set us up for the good news, but these blessed events are not the good news itself.

The good news that Jesus was driven to preach, the good news that Paul was driven to preach when he said to the Corinthians, "Woe to me if I preach not the gospel," is the good news of the cross, the good news of the forgiveness of sins and the gift of eternal life. You and I may experience God's "rationing" of his miraculous healings, both when Jesus walked the earth and in our own day, as a kind of calculating coldness. In reality, it is a merciful gesture on his part. It does not permit us to mistake the sign of the good news, the premonition of the good news, the foretaste of the good news, for the good news itself. God doesn't want us to develop a taste for mass-produced table wine when he's got a case of the finest champagne he wants to share with us. God doesn't want us to get too accustomed to travelling coach, because our destiny is first class. Our inclination is not to ask too much of God, but to depend on him for too little. The gospel that the healing miracles point us to, the gospel that drove Paul to become all things to all people, is the gospel that what Jesus did on the cross makes us worthy to share in the inheritance of the saints in light. That's good news. Amen.
Posted by Bishop Daniel Martins at 10:00 AM