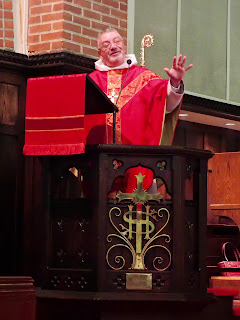 Thanks to serendipity, or to the Holy Spirit, or, perhaps, to both, the Saturday before Palm Sunday, which is when we’ve been having the Mass of Chrism in this diocese, happens to coincide with a Prayer Book major holy day, the feast of St Joseph, which, in turn, always coincides with the anniversary of the consecration of the eleventh Bishop of Springfield, but, in this case, a somewhat nodal anniversary thereof, being the fifth. Five years ago at this very hour, many of us who are here today were gathered across town at the First United Methodist Church to do the deed that gives me a guaranteed seat in this church whenever I come by, no matter how crowded it might otherwise be!

So I have a bit of a homiletical needle to thread this morning. I don’t want to allow either an ordination anniversary, or the feast of St Joseph, to overshadow the ordinary, regular occasion that we are observing. Both of those are, in a sense, interlopers, uninvited guests who just happened to be in the neighborhood when the party was happening. The ordained among us are here to collectively renew the vows of our ordination, and all of us are here to share in the blessing of sacred oils that will be used to sanctify important moments in people’s lives—baptism, confirmation, the onset of serious illness, the imminence of passage out of this world into the next, and, from time to time, ordination to the priesthood, when hands are anointed with chrism.

Fortunately, it really doesn’t take a shoehorn, or even very much imagination, to weave all these themes together. Indeed, they play with one another very well.

Let’s start with St Joseph. Soon after my consecration—and, I am given to understand, inspired by it—Fr Ralph McMichael wrote an article that appeared in The Living Church in which he set the vocation of St Joseph to be a guardian of the Holy Family alongside the vocation of a bishop to be a guardian of the Church. The word “guardian” is semantically rich; it has different aspects. Certainly, someone who defends, or protects, or drives away attackers can be said to be a guardian. In an environment when much that has been regarded as a sacred inheritance does seem to be under attack, this is not an altogether inappropriate image. One can quite readily conjure up the silhouetted image of Joseph leading his wife and child from danger in Bethlehem to relative safety in Egypt. You need have no doubt that your bishop will defend the Church—her creeds, her liturgies, her sacraments, her scriptures, her rightful place in a free society, when it is my duty to do so. But perpetual wartime footing, the constant sense of having to defend, can and does lead to defensiveness, a preferential option for pugnacity and bellicosity that sears the souls of whose who live in that place for very long, and, in its negativity, is evangelical suicide.
But, to be a guardian can also denote an ongoing activity and ministry of creating a nurturing environment that fosters growth and maturity. The gospel reading appointed for this feast is the familiar narrative of the incident when Jesus was twelve years old and manages to ditch his parents in the big city so he can spend some quality time in the Temple with the top-tier elders and teachers of the Jewish community. Mary and Joseph are a day out of town, perhaps traveling with a large group from Nazareth, and figure Jesus is somewhere among the “village” that is helping them raise their child. When it dawns on them that he’s not with them, they high-tail it back to Jerusalem and finally track him down in the Temple. In Luke’s account of the incident, Joseph doesn’t say anything—Mary does all the talking—but it seems safe to speculate that he took a strong parental interest in the endeavor, and, in fact, probably led the search. In so doing, Joseph was exercising guardianship, providing the child entrusted to his charge with safety and security, providing a home in which Jesus could “increase in wisdom and stature and grow in favor with God and man.” And, significantly, we are told that Jesus “was submissive to them.” He was part of that network of accountable relationships that describes a healthy family. Joseph, the guardian of that family, saw to it.

Those here who are in the order of presbyter share with Your Friendly Neighborhood Bishop the ministry of creating that place, that environment, where the baptized people of God can receive the life of Christ in the sacraments, be formed through catechesis and community and service (which is diakonia—so the deacons are in this picture as well) so that the souls entrusted to our care, those of whom we are guardians, may “grow up in every way into him who is the head, into Christ” (as St Paul expresses it to the Ephesians)—in other words, growing up into the Messiah, the Anointed One. So, our anointing of people, our use of these oils, at baptism and at times of illness—each of these events become a link in the chain that configures their lives to the Anointed One, to the Messiah, to the Christ. And the environments you all help create in the Eucharistic Communities that you serve takes the baton from the Sacred Chrism and the Oil of the Sick (and, if we were to develop a robust catechumenal culture in this diocese, may it please God, the Oil of Catechumens) and leads people along, step by baby step, into discipleship, into imitating Jesus, into announcing the nearness of the Kingdom of Jesus and relating to one another in ways that provide a compelling model of the Kingdom to people who are hungry for good news, who are divided from one another and enslaved by sin.

The proto-Messiah, of course, the prefigurement of Jesus as the Messiah, was David, son of Jesse, who became the Anointed One at the hands of the prophet Samuel. A few minutes ago we heard the narrative of the prophet Nathan relaying the Lord’s assurance that the kingdom being given to him was a Really Big Deal, and that he was really just the warmup act for something so great he really couldn’t imagine it, that through his DNA (well, if Nathan had known about DNA), through David’s DNA, God would bless all humankind. (And this echoes similar promises to Abraham, much earlier, that we’re familiar with.) But the remarkable things is, if you follow the chain of DNA provided by both Matthew and Luke, it gets you right up to Jesus, but not all the way there. It gets you to—you guessed it—Joseph, who was only the “supposed” father of Jesus, as Luke delicately expresses it.
So we come back around now to guardianship. Joseph’s peculiar vocation and charism of guardianship was to be a surrogate—for a time, and then to fade gracefully into obscurity. I will share with you quite personally that I am acutely aware now, five years in, of my episcopate having entered middle age, if indeed only that. I’m 64 years old. I can retire at 68 and I must retire at 72, so … do the math. It’s slipping by with exponentially increasing speed, it seems, so I’ve had to let go of any ego-driven notions of fundamentally remaking the Diocese of Springfield on my watch, although there’s a great deal of remaking that needs to be done if we are to respond faithfully to the drastically changed cultural environment in which we operate. No, I am but a surrogate for the Chief Shepherd and Bishop of our souls, a surrogate, like Joseph, for a limited time, and then it will fall to me to follow that patron of my episcopate into obscurity, hoping only that there might be a decent portrait of me in the conference room across the alley.

But I am, of course, not in any way unique in this regard. It applies to all the presbyters and deacons who are here, and those who will yet become presbyters or deacons, and, for that matter, even the lay folk here who will never be ordained, because we are all replaceable, and we are all mortal, and most of us will probably be anointed yet again, upon the onset of what will turn out to be our final illness. We are all “anointed ones” in virtue of our baptism, and we are all “anointed ones” in virtue of our mortality. So it is meet and right that we are here to bless this oil of anointing, and to pledge ourselves once again to the ministries for which we have been anointed, and all under the watchful and benevolent gaze of St Joseph, who is our role model in guardianship and surrogacy and knowing when to quietly exit the stage. May his prayers assist us in what we do on this day. Amen.

Popular posts from this blog

The Fourth Sunday after the Epiphany

Ten years ago, minus about six weeks, I served as the supply priest for Trinity, Lincoln six days before my consecration as Bishop of Springfield. Today I was there for the final regular scheduled canonical parish visitation of my episcopate. (I have a few more gigs on my calendar: March 7 in Mattoon, the Chrism Mass, the Triduum at the cathedral, May 30 in Cairo, and June 27 back at the cathedral--May 2 is available and not yet spoken for--but the every Sunday routine of my life for the past decade (in a larger sense, for the last 32 years) is at a major flex point.) As much as it could have been in the midst of a pandemic, this morning at Trinity was luminous. We confirmed eight adults, six of them qualifying as "young." My homily had to compete with the sounds of active young children. (I would much rather do that than have no kids in church.) Trinity is one of the exciting points of light in my ministry in the diocese. I took my time getting out of Lincoln because I wante
Read more

January 31, 2021
Substantive phone conversations with the rector of Lincoln, the President of the Standing Committee, and the Canon-to-the-Ordinary. Attended the live-streamed memorial service for a former clergy colleague, and continuing friend, with whom I was in serious conversation about coming to the diocese less than a year ago, who died quickly of COVID at age 66. Then, earlier than I actually needed to, but wanting to get out of town ahead of the snowstorm, I packed up and headed south to Lincoln, where I had time to do some significant reading before hitting the sack.
Read more

January 26, 2021
Highlights: Started liturgy planning work for March 7 ordinations to the transitional diaconate. Moved the ball down the field re jump-starting the Department of Mission. Attended a one-hour Zoom meeting of my House of Bishops table group. Reviewed materials submitted by a potential candidate for one of our parishes in transition. Arranged for a video interview. Plus ... staying on top of incoming emails and small administrative tasks.
Read more